Dear Catholic men, remember that by your Baptism you have been clothed in Christ and now share with Him the duty and vocation to come to the rescue of this world, whether in the common role of a father, the supernatural roles of a priest, religious, hermit or a monk, or the extraordinary vocation of a Catholic Soldier.

Remember, that all our rights as Catholics, to practice our Faith in peace, come from God on the supernatural level, but exist and are recognized on the civil level only by means of the heroic feats and power of the Catholic Soldier. For Catholic Society cannot exist without the Catholic Soldier and indeed is threatened in its very existence without him. He thus takes on a role which in its own proper manner, temporal and civil and military, is analogous to the role of Christ Jesus Our Redeemer, in his temporal and eternal, hierarchical and civil, peaceful and military vocation to conquer the Evil One and liberate us from the punishment of the eternal slavery of death into which he cast us.

The vocation of the Catholic Soldier is thus a holy one, a noble one, and a most necessary one. All Catholics need to honor them, support them, and help them come into existence, get the training and support they need, open the way for them and let them do their work, so that we might all live in peace and so that in those parts of the world where the order of justice has been so perverted that only military solutions can restore that order, do their work!

For this reason there have been countless Saints and Blesseds who were soldiers, among whom are these:

The Saints of the Holy Crusades

These are the Patron Saints of our Order. You can find brief information about them here, and you can find the places where their mortal remains are kept, as places of pilgrimage in our Order, marked with a read Cross (

) on our Global map!

Blessed Charles the Good (1082 – March 2, 1187 A. D.), a Dane. Born a prince, the son of King Saint Canute of Denmark and Adela of Flanders. After his father‘s murder, he was raised in the court of his maternal grandfather, Robert de Frison, Count of Flanders (part of modern Belgium). Fought in the Second Crusade. Succeeded Robert II as count of Flanders in 1119. Married into the family of the Duke of Clermont (in modern France).

His rule was a continuous defense of the poor against profiteers of his time, both clerical and lay. Called the Good by popular acclamation. Reformed laws to make them more fair, supported the poor, fed the hungry, walked barefoot to Mass each day.

Martyred in the church of Saint Donatian of Rheims at Bruges by Borchard, part of a conspiracy of the rich whom he had offended. His relics are kept at the Cathedral of St. Savior, at Bruges, Beglium. Feast Day: March 2nd. 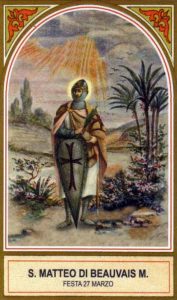 Saint Matthew of Beauvais (died 1098 A.D.), a Frenchman, who participated in the First Crusade as a Knight. Captured by Saracens, he was ordered to renounce Christianity; he refused and so was beheaded, as a Martyr. Feast Day: March 27th. 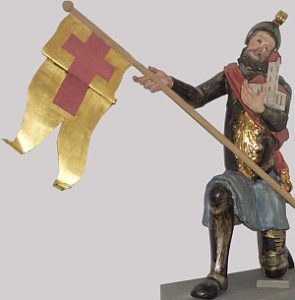 As a Knight, he participated and fought in the First Crusade. Founded a monastery at Langnan, Germany c.1122 A.D. Feast Day: May 1st. 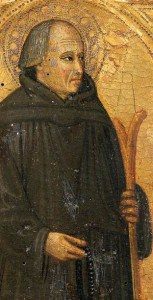 As a Crusader he was captured, later ransomed, and then returned to Italy. Franciscan tertiary (SFO).

Lived the rest of his life as a hermit noted for his piety. Feast Day: May 13th. 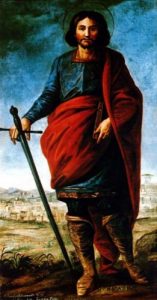 Fought in the defense of Acre. Captured by Saracens. They ordered him to renounce Christianity and convert to Islam; he refused and so was Martyred by being beheaded.

He is patron of Caccamo, Italy. Feast Day: July 1st. 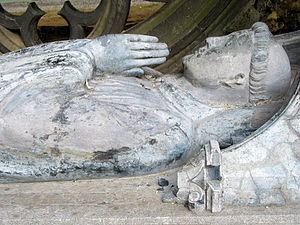 Saint Gobert of Aspremont (c. 1187 – 1263 A.D.), Frenchman, who served as a Crusader both against the Albigensian Heretics in Southern France, and with the Holy Roman Emperor Frederick II, on the Sixth Crusade.

Afterwards, he returned to France and became a Cistercian Monk in 1237, and lived for a time as a Hermit in Picardy. His relics are buried at Villers-en-Brabant, in France. Feast Day: August 20th. 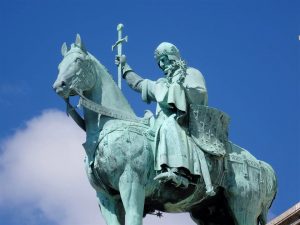 Saint Louis IX (25 April 1214 – 25 August 1270 A.D.), King of France & Franciscan Tertiary. Led the Seventh and Eighth Crusades, first in Egypt, then in Tunisia. Only French Monarch to be canonized. Considered his duty to lead Christians in Crusade to be greater than that of ruling his Kingdom. Died of dysentery on the 8th Crusade. 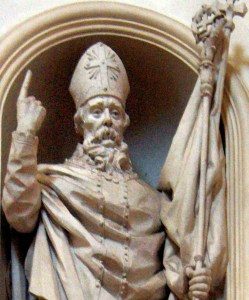 As Abbot assisted on the First Crusade as a Military Chaplain from 1096 to 1104 A. D., and returned home safely. Feast Day: September 28th. 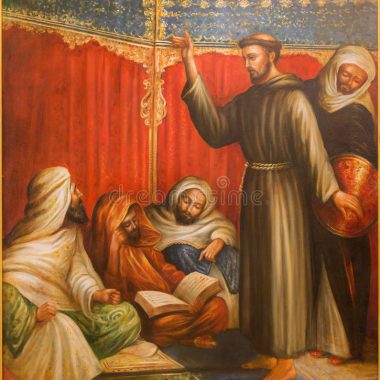 Saint Francis preaches to the Sultan of Egypt

Participated in the Fifth Crusade at Damietta in Egypt, where he brought a priest to serve as chaplain to the troops-

Prophetically foretold the outcome of the Crusaders’ battle with the Sultan of Egypt, Al-Malik al-Kamil.

Courageously crossed enemy lies to preach the Gospel to the Sultan, for whom he obtained the grace of conversion on his deathbed. Famously remembered by the Muslims in Egypt as the Christian Sufi who debated with the Imams of the Sultan. Returned home safely. Blessed Hugo of Canefro (1148 – d. October 8, 1233), Italian nobleman, who after a life as a soldier, attended the Third Crusade and then joined the Knights Hospitaliers.

After leaving the Holy Land he served the poor for 50 years at the Hospital of the Order at Genoa, Italy.

He is buried in the Church of St. John of Jerusalem, at Genoa. He is an outstanding miracle worker in life and after death. His feast day is October 8th. 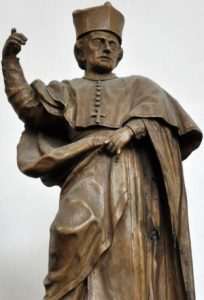 When he returned home he convinced his wife and family to let him follow a call to religious life. Hermit and Premonstratensian monk. Founder and abbot of the their monastery at Neufontaines, France, which was noted for its hospital where Gilbert cared for the sick. Feast Day: October 24th.