Here you can read our prospectus for the creation of a Palladium backed private currency.

The concept of a private currency pre-exists the concept of legal tender. Private currencies are the origin of all currencies. Originally they were private measures of known commodities. The first state backed currency was the measured standard weights of silver nuggets minted by the Assyrian Empire in the 8th century B.C.. To these, there succeeded the coins minted by the Greek States of Asia Minor in the 7th century B.C.. The minting of coins was at start a private affair. Later their minting was reserved to authorities with temporal jurisdictions.

With the invetion of Bank notes, private banks issues their own script as a surety that they would pay on redemption. In the 19th Century, private banks in the U.S. A. all printed their own Bank Notes in US Dollars, as private currencies.

With the increasingly uncertain future of the principal fiat currencies of the world, which are continually being intentionally devalued by the national or transnational governments which issue them, there is a real economic need to have alternate currencies. The phenomenon of cryptocurrencies is part of this response. But cryptocurrencies are highly volatile since any mathematical system for generating primes is limited to a near finite number of solutions knowable to man. For that reason, private currencies backed by real valued commodities or metals are much better medium of exchange.

Of all the precious metals, few have the characteristics of stability in value and abundance to maintain a high value, than the precious metal Palladium, which is extracted in the production of nickel or silver refining.  Unlike Silver, it has a high value. Unlike Gold it does not have as common industrial or commercial uses, and it is not as speculated. Also, it is a metal which as of now is rarely used as a reserve metal for national banks.

The abundance of Palladium also makes it a metal capable of reserve, since it is neither too rare nor too abundant to cause its to be a reference value for a private currency.

Thus, the solution is a private currency backed by Palladium.

To facilitate and enable our private Palladium backed currency, we propose the foundation of a corporation which would act as a private authority for the issuing of the currency, called the PalladiumBank. A single word to avoid the legal misconception that it is a Bank, subject to Banking laws. But likewise to signify that it would have the duty to maintain the value of the private currency and guarantee the authenticity of the notes used. We estimate that an initial investment of $10 Million Dollars US would be necessary to establish such an institution in the USA.

The PalladiumBank would print and issue the notes and guarantee their exchange for Palladium or in other recognized currencies or cryptocurrencies. It would reserve a quantity of the precious metal to back each note sufficiently, to guarantee its value in milligrams of palladium. It would contract with financial institutions world wide for the recognition and exchange of Palladium Notes, which it issues. Finally, it would establish, maintain and oversee the security features necessary to prevent counterfeiting.

A Concept of Design

Our Palladium Notes would be a private currency (or voucher) denominated in grams (or milligrams) of the precious metal Palladium (Atomic symbol: Pd), and printed in full color security paper measuring 3 by 5 inches, protected by 5 security measures and a non sequential serial number unique to each note and edition. Bearing the words “Not Legal Tender” they conform to U.S. Federal and State Laws against fake currencies and unregistered securities.

The sale of these notes is currently offered in exchange for real currencies or cryptocurrencies. Upon the sale, the funds received in exchange are placed in an Escrow Account of the PalladiumBank, used to acquire the palladium metal sufficient to back the note to full value, so as to secure the repayment of the Note upon redemption.

The PalladiumBank by its endorsement on the observe of each note would guarantee contractually to redeem the note for cash (in those countries where private currency is not unlawful) at the value had by the weight of the precious metal Palladium indicated on the note.  Thus a 1 Gram note will be held to have always the value of the spot price* of 1 gram of palladium. These notes would be denominated in Palladium to avoid the U.S. Treasury laws against denominating private currency in U.S. Dollars and to provide for a value for each note which is independent of any legal tender or private currency already in circulation. Note Well: this means that the value of each Note will fluctuate with the spot price of Palladium. The PalladiumBank and its successors in Law will regard these notes as having the stated value in perpetuity.

The Palladium Notes would feature artistic montages commemorating the Crusades of Old and the famous Catholic Crusaders and Clergymen who participated in them to honor the memory of their heroic deeds, without constituting an endorsement of their less valorous accomplishments.

These notes are for sale to the general public. Their sale is recorded and registered on the books of our corporation so as to comply with U.S. Laws against knowingly creating a system of money exchange which is unregistered and thus liable to use by money launderers. This registration will also assist our Order in authenticating the notes and investigating any possible crime that may be committed in their use or theft. 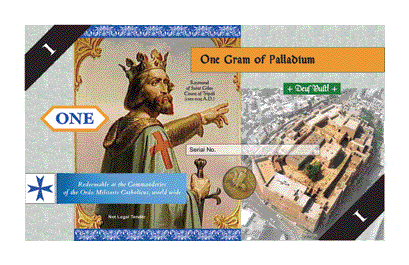 The obverse of our 1 Gram Palladium note features Raymond of St. Gilles, the Count of Tripoli

The reverse of our 1 Gram Palladium note features the siege and capture of Tripoli by the combined forces of Godfrey of Bouillon and Raymond of St. Giles.

For More Information, prospective investors are invited to contact our offices